Barry island is located some 9 miles south of Cardiff. Access to the island up until the end of the 19th century was either by foot at low tide or via a steamer. A railway link was established in 1896 via a long pier and the docks were built in the 1880s for exporting coal worldwide, which effectively linked the island with the mainland.

Formerly famous for its holiday camps, Barry’s current population of some 50,000 is still boosted during the summer months by large numbers of visitors. It is a popular resort, with most of its activities centred in the Whitmore Bay area (ideal for surfing, windsurfing, sea kayaking or beach volleyball) and in the nearby pleasure park , which has amusement arcades and more than 50 rides and other attractions (entry is free and tickets for the rides can be bought at various ticket stalls). Attractions, amusements, gardens, gift shops, pubs and eating places keep visitors occupied on both sunny and wet days. 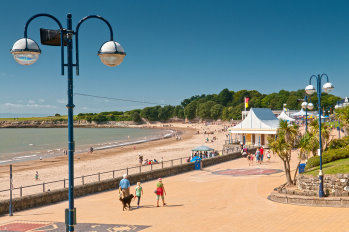 Other attractions include the Quasar Centre, which offers laser gun games similar in style to paintballing games. Players must be at least 7 years old. The ruins of the 13th century castle are worth a visit – a small two-storey gatehouse and the walls of a hall are now all that remain but are remnants of a small fortified manor house – it was strengthened in the 14th century when the large hall and gatehouse were added. The Glamorgan Wartime Heritage Centre tells the story of Barry's war-time past with some fascinating memorabilia as well as some military vehicles, a reconstructed World War I trench and an Anderson shelter.

Fans of Torchwood, Doctor Who, Casualty and of the supernatural drama, Being Human, will probably recognise several parts of Barry Island and tours to visit locations associated with Gavin and Stacey are available. Alternatively, you may wish to try to track down some of the haunts reputedly used by the infamous 18th century highwayman, Dick Turpin!

A broad range of accommodation is available together with good road and rail links. Parking is provided near the beach. Further information about the area is available at the Tourist Information Centre, which is located on the promenade.