A visit to modern Cardiff would not be complete without making time to see one of Wales’s leading historical attractions. The current Cardiff castle was built; long ago, on the site of a Roman fort which was located at a point that allowed easy access to the sea, allowing them to control both land and sea trade routes, as time and centuries past the site was re-built as a motte and bailey castle in the late 11th century by the Normans during their conquest of the land and later rebuilt in stone in the 12th century by Robert of Gloucester. 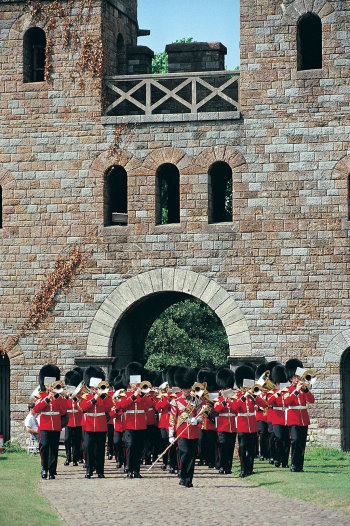 Being a large military facility it was only normal that the castle became the heart of the town that that would continue to grow around it, no doubt the ever present citadel of stone gave the inhabitants of the town confidence, and the security it afforded them guaranteed protection.

The castle past through the hands of many noble families, each one adding their own "personalities" to the building, as time passed the need for the castle to act as a "military" facility faded, this part in due to the fact that weapons technology has rendered useless thick walls of stone and as a result many castles began to fall into disrepair, this had only been a continuation of a process that had been started during the English civil war, some castles deliberately destroyed or "broken" as a strategic facility in order to prevent them being used again at a later point. However the castle had seen action in both the frequent Welsh uprisings by the native Welsh, in an attempt to throw off the yolk of English oppression and then by the Parliamentarian forces of the English civil war.

In the end the castle past to the Marquis of Bute, it was under the care of this family that the castle began to change into what would now be called a "stately home" the money to carry out all the renovations and alterations was mainly gained from the fact that Cardiff was rapidly becoming one of the world’s largest coal exporting ports, this money in turn, was used to transform the ancient castle, the skills of Henry Holland and the famed Capability Brown were brought in to transform the castle into a Georgian work of art. However it is a sad note that much of the original stone castle outer structure was knocked down during the modernisation process, but in the act of destroying the old, the "new" castle became the object of wonder that now occupies the site.

Cardiff is now seen as a new, modern and vibrant city, the capital city of Wales and at its heart a magnificent and beautiful castle whose stones could tell many a tale, this mingling of modern and ancient development represents so well the transformations that Cardiff has itself seen over its long time.